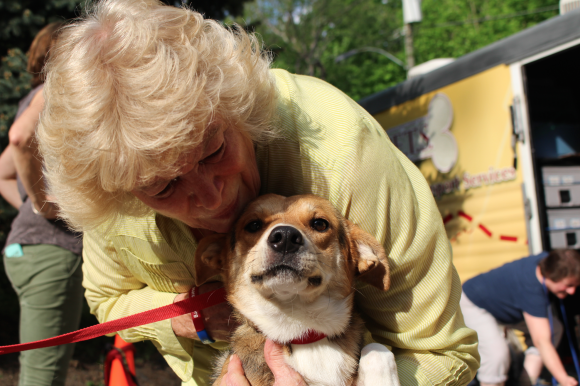 On Tuesday afternoon volunteers and staff waited in the parking lot of Northwind Kennels in nearby Bedford, NY as a jumbo animal transport rolled to a stop. Several found themselves moved to tears as they anticipated meeting the 24 dogs whose muffled barks came from crates inside the truck. 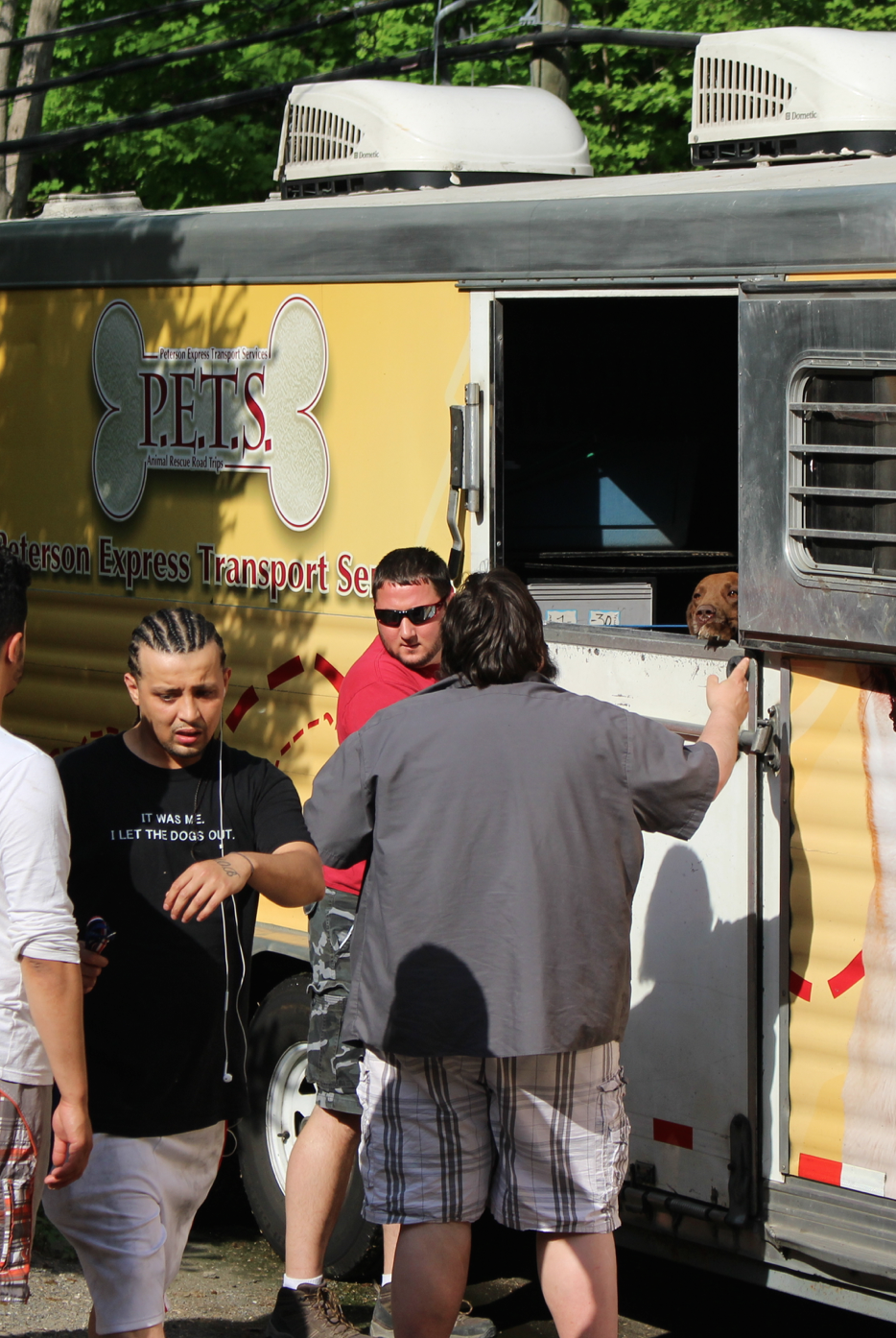 The driver walked around to open the Dutch door on the side of the truck and the barking grew louder.

The first dog, a big brown hound-mix, popped his eager head over the Dutch door and smiled.

Tears instantly dried up. This was a happy boy ready for his next adventure. Staff lined up to escort each dog up the hill to Penny Smith-Berk’s  Northwind Kennels, where they would rest after their long journey from Alabama, and ultimately be adopted into loving local homes.

One after another, the beautiful dogs bounced out of their crates and into the arms of awaiting staff and volunteers including Franchesca Biondi of ARK Charities, the non-profit that organized the transport, Northwind Kennels manager Beth Sylvestri, Christine Engels, Northwest Kennels Adoption Coordinator, Tina Zinn of Brookfield and  Kerrin Coyle of Cos Cob. 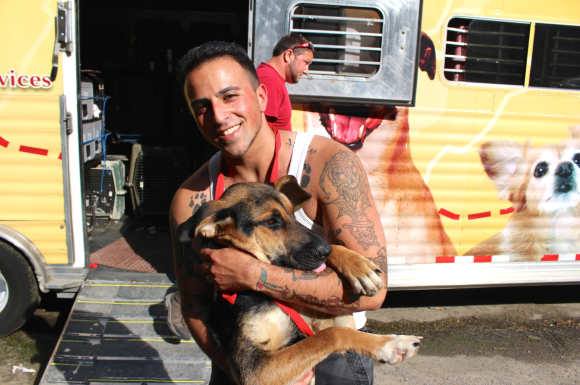 Though it was not the original intention of ARK Charities, the two dozen dogs were relinquished to them from a lone shelter in Alabama after inviting them them to sterilize the 24 dogs — all males.

The main goal of ARK Charities, a not-for-profit corporation supported by Ark Sciences, Inc., is to partner with non-profit shelters and animal organizations across the US to sterilize male dogs and work toward lessening the overpopulation crisis and lowering the super high euthanasia rate. 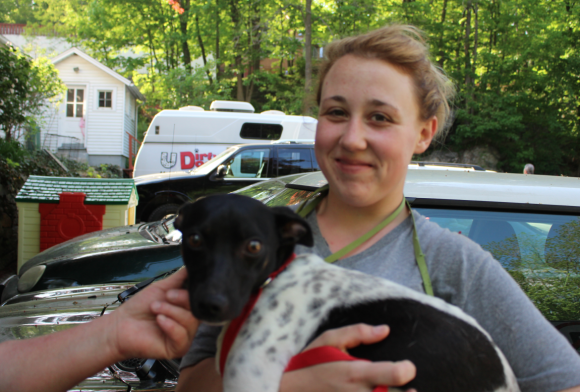 Ark Sciences, Inc.’s flagship product is Zeuterin, a concentration ofZinc Gluconate neutralized with Arginine. The result is a safe, fast non-surgical method of castration for male dogs. Zeuterin eliminates the risks associated with surgical castration and allows veterinarians to combat the problem of pet overpopulation in a safe, humane, and manageable way.  No incisions and no general anesthesia means the procedure is safe and fast.

According to Franchesca Biondo who is a volunteer with ARK Charities, the method is ideal for mass sterilizing events, where a large number of dogs receive the procedure and walk away bright and alert. 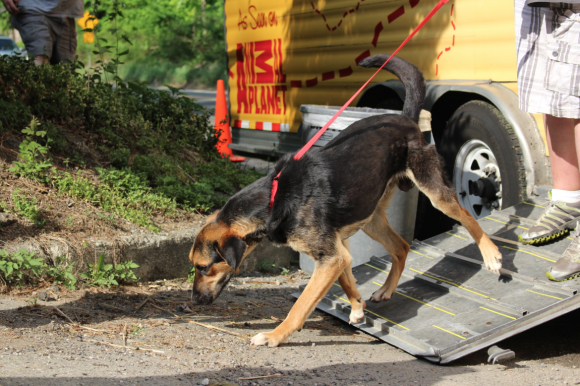 So why the 24 dogs in Bedford? ARK Sciences partners with non-profit shelters and animal organizations across the US. At one particular Alabama shelter, the owner, after embracing embracing the Zeuter process and allowing the dogs to go Tennessee to undergo the procedure, asked for some help.

During a childhood punctuated by watching neighbors fill pillowcases with litters of unwanted puppies and tossing them into the creek to drown, a girl who would go on to run her own shelter, got in the habit of pulling pillow cases out of the water.

Over the years, the number of dogs she took in swelled. This month she asked for some help. Hence the 24 dogs. The transport project was supported by ARK Charities and an anonymous donor. 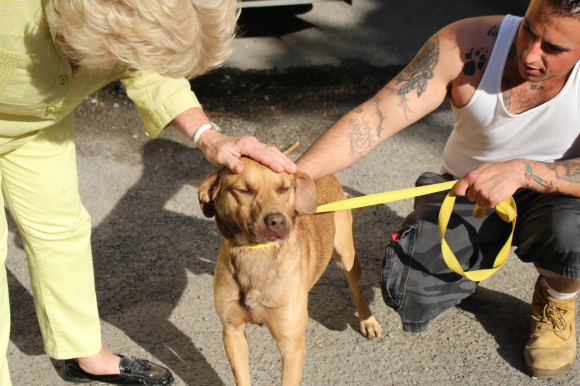 One volunteer likened the southern state dog overpopulation to a flooded basement. “You don’t start bailing the water out with buckets. You start by turning off the spigot,” she said.  And, to that end, Biondo, familiar to many in Greenwich from her volunteer presence through Adopt-A-Dog, is working with ARK Charities to bring the new non-surgical sterilization procedure to under-served regions in southern states where shelters are overwhelmed.

The task is daunting. The goal may take years if not decades to achieve. In the meantime, the southern practice of allowing dogs to roam, and an entrenched reluctance to spay or neuter — and all those dogs being euthanized is tough to stomach. Factor in the the warm southern climate that results in high rates of deadly diseases like Parvo, it is difficult not to discouraged. 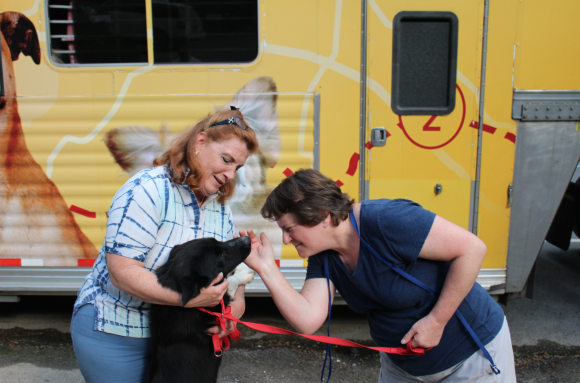 All dogs deserve a second chance and a better life — including the dogs languishing in the municipal shelters like the one in Greenwich. But the sight of 24 dogs coming off the transport and the thought of them finding loving homes locally is a bright spot in a long journey toward controlling the dog overpopulation crisis.

Tell Us Your Furever Story 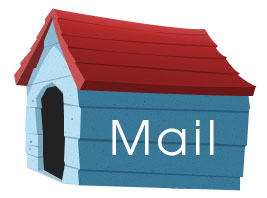 Did you get a Furever Dog or Cat from Rescue Right?
Did you have a great experience with us boarding your pet with Northwind Kennels?
We want to hear your story!
Send us Pics and stories and we will post them!
Click the link below to send your storyTell Your Story